The Boronia Football Club was officially founded in 1932.  However, a team representing Boronia was admitted to the Scoresby Districts Football Association in 1930. A combined Bayswater-Boronia team also played in the same league from 1927 to 1929.  Boronia won three “A” Grade premierships during the 1930’s and one more in 1949 after play was interrupted by World War II.

There were many successful seasons during the 1950’s in the Croydon-Ferntree Gully District League as Boronia undertook six finals campaigns before finally closing out the decade in 1959 with a premiership flag, breaking a ten year drought.

Boronia Junior Football Club was formed in 1972, fielding three teams that season – Under 10, Under 13 and Under 15.  Alf Lacey was President and Jen Armstrong was Secretary and Treasurer. The Junior Club was originally known as the “Sparrow Hawks”.  Many players from that time went on to play as seniors and veterans at Boronia Football Club.

In 1977 the Club had a hugely successful year with all three teams (seniors, reserves and under 18’s) winning Division 3 EFL premierships. This success was a result of the 1976 “Waverley Invasion”, an initiative of a group of local businessmen, determined to get the club out of Division 3, that recruited a number of players from Waverley in the Victorian Football Association. 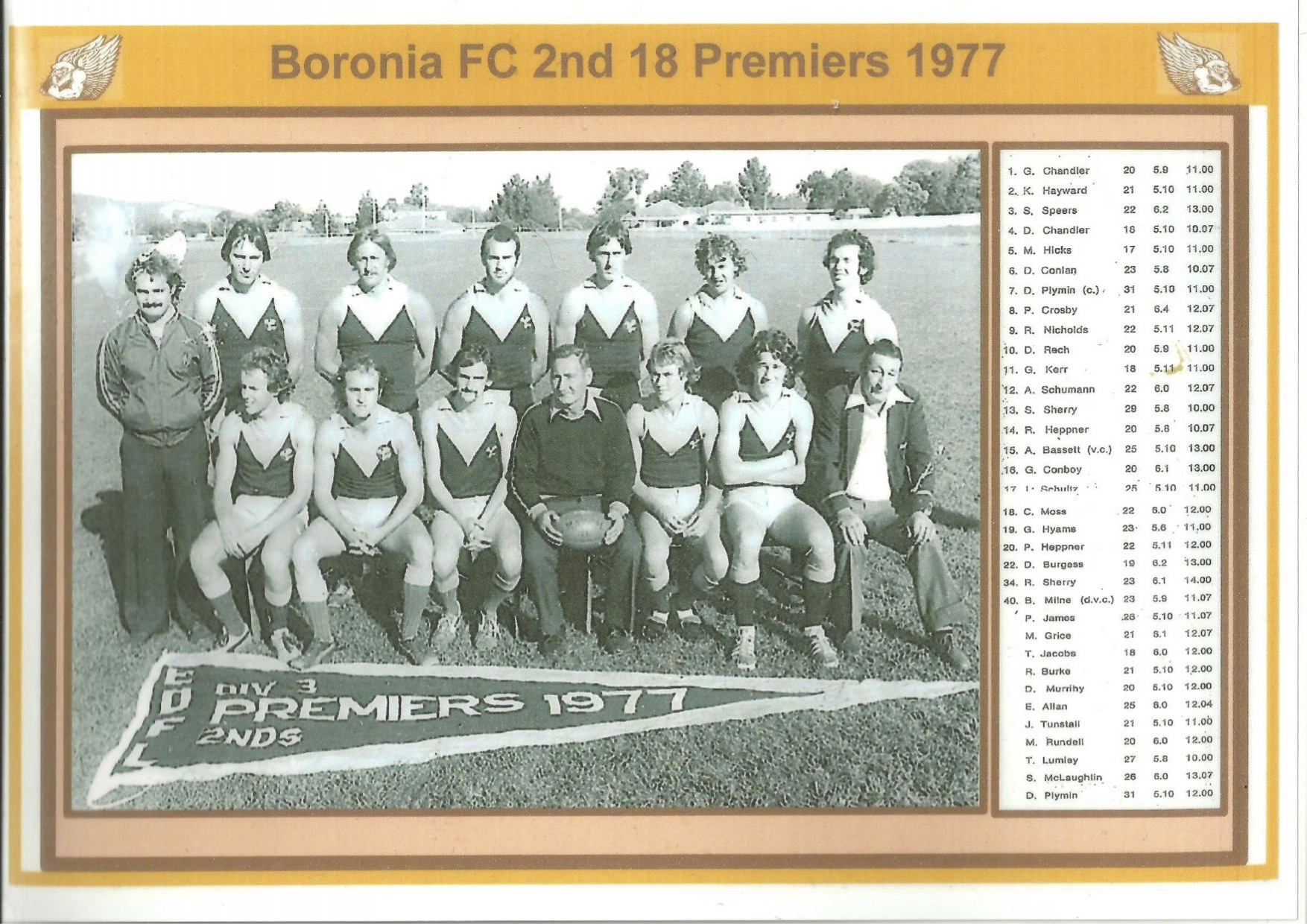 By the 1980’s the Junior Club had four or five teams in what was the Knox Junior Football Association (KJFA).  At the end of the 1997 season the KJFA was merged with the EDFL to become the Eastern Football League (EFL). During the mid 1980’s the juniors had a lean patch, only being able to field three teams due to the large number of families’ moving away from the Boronia to the newer Knox / Wantirna areas where the population grew.  In those days, two or three players were invited up from Boronia West’s VicKick to play with the Under 10’s each week. This gave them the experience of playing competition football and to introduce the young families to the football club community.

In 1986 the Club took out the Division 2 senior premiership for the second time, winning promotion to Division 1. The Club performed well in Division 1 for ten seasons, making the finals five times, but in 1996 the club was relegated back to Division 2.  It did not take long before Boronia was a force in Division 2 under the coaching of Darren Linkins, appearing in successive grand finals in 1998 and 1999.  2000 saw the re-emergence of the Hawks with a resounding premiership victory at Waverley Park against Blackburn Football Club. 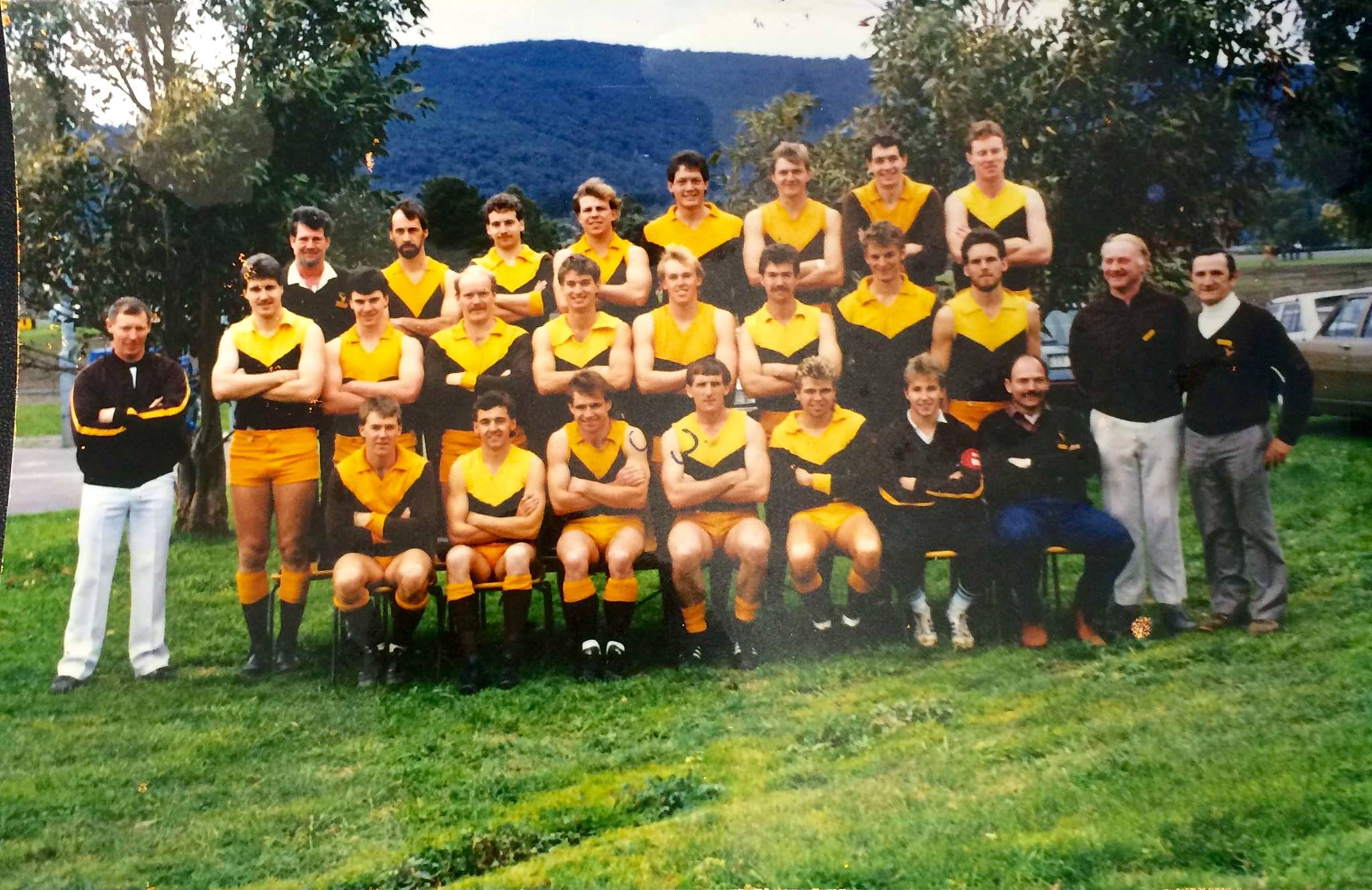 Having held the premiership cup aloft in 2000, the end of an era at the Hawks nest followed with a number of retirements and injuries that left the Club undermanned for the cherished return to Division 1 in 2001. After winning 44 matches from 54 in the previous three years, Boronia were winless in 2001 and were relegated again after one year.  The club continued in the doldrums during the next few years and was relegated once more after only three wins in 2005.

The Club has since been a regular finalist in Division 3, but could not take the final steps to promotion with a senior premiership for the best part of two decades. There was some consolation with three premiership flags each for the Reserves and Veterans. The outstanding performances of Dean Grice were a continuing highlight for the Boronia faithful as he won four Paul Edie Medals as the EFL’s Best & Fairest Player in Division 3.   Dean also won the Club’s senior Best and Fairest award, the Bob Henry Medal, six times from 2006 to 2011.

Netball was introduced to the Club in 2014 when the EFL launched a Friday night netball competition. Kellie Newton was the Club’s first Netball Manager and two teams, Boronia Hawks and Boronia Gold, were entered in the new competition. The Club was very successful, winning the inaugural Division 1 netball premiership. A third team was added, Boronia Brown, and the Club was once again successful when our top netball team, Boronia Hawks, won the 2017 Grand Final in the newly named Premier Division.

The football team started to build again for success from 2009 under the guidance of well credentialed coaches Peter Bennett, Marc Hardy and Peter Brown, with the strong support of assistants Drew O’Hare and Craig McKenzie.  These years of development, and the talent pathway from Boronia Juniors, saw the football Club performing well, without being able to win promotion through a senior football premiership.

Women’s Football was introduced to the Club in 2017, as the Hawks fielded a team in Division 2 of the Eastern Region Women’s Football League. Club legend Ray Lacey was appointed as coach of the team, with Senior President Scott Nicholas later joining the team as Co-Coach. The addition of the women’s team was a strategic initiative of the Club’s policy of inclusiveness. The Club’s team features many players with family names that are very familiar to long-time supporters of the Club.

Success finally came in 2018 following the appointments of new coaches in Matthew Clark, Steve Teakel and Craig Brockley.  The Hawks, going in to all three games as underdogs, triumphed in the Seniors, Reserves and Under 19’s Grand Finals for a memorable Triple Premiership, last achieved by the Hawks in 1977. The Club was also recognised as the Division 3 Club of the Year for the performances during the regular season. 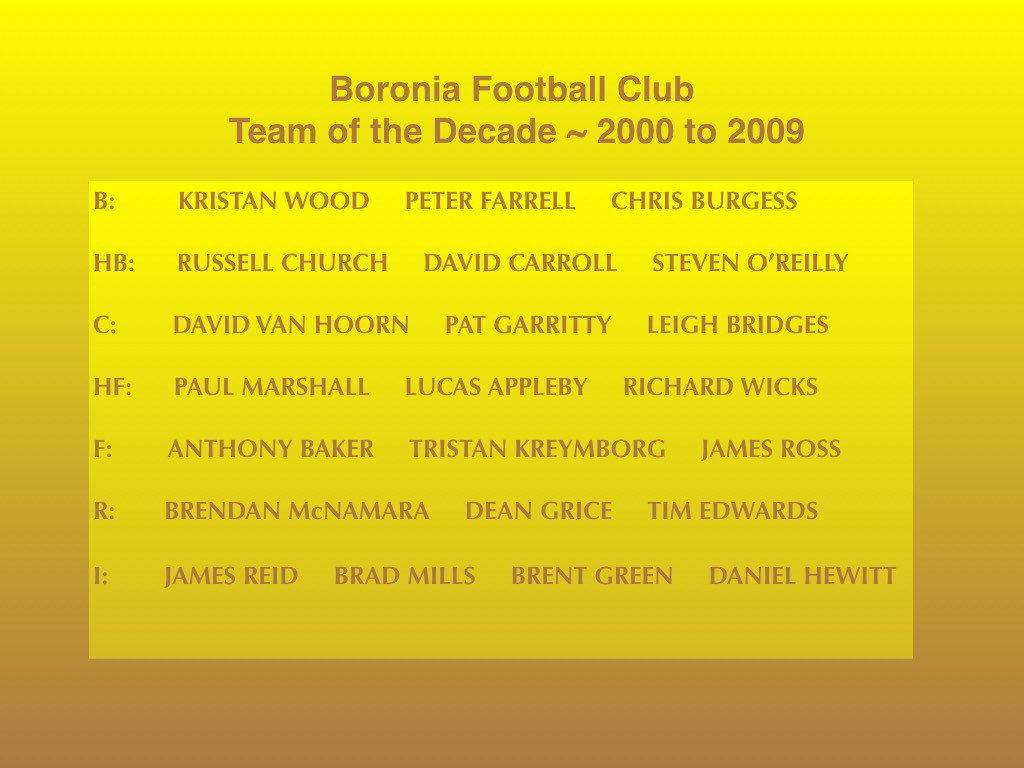