Winning Ugly – by “The Voice in the Outer”

There was a great atmosphere around the ground as all supporters were invested in each contest and each umpiring decision.  In what was an epic last quarter, the heart rate was high and the banter between both supporter groups was at fever pitch.  A great reminder why local footy is such a great game.
The rain had held off and the game started in dry cold conditions, with the ground in great nick.  From the first bounce we saw that SB had come to play.  After being smashed the week before by over 100 points, they targeted a couple of Hawker players off the ball and showed they would not take a backward step. The Hawker was up to the physical challenge but was wasteful in front of goal, kicking 3.6 to 3.1 to win a highly contested first quarter by 5 points. 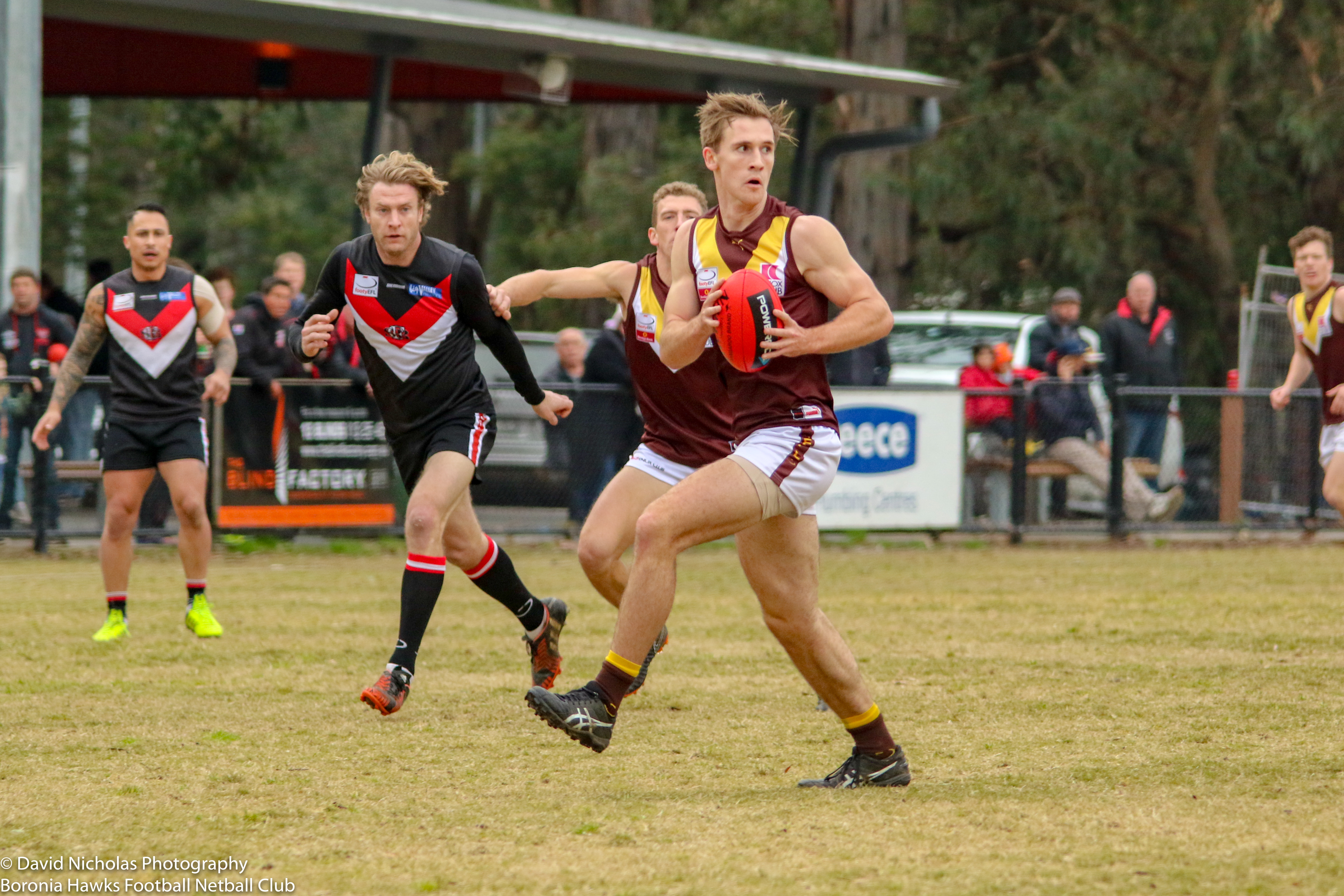 The Hawker started the second in complete control kicking the first 3 goals.  We out played SB on their short ground and 15 minutes into the quarter we held a 4 goal lead.  SB made a couple of changes to their on-field setup which clogged up our forward line.  This tactic, the wet weather closing in, and the Hawker taking the foot off the pedal, left the door ajar for SB to kick a late goal and give them the incentive to crack in hard in the second half. The Hawker leading by 18 points at the long break.
The rain had set in for the afternoon as we started the third.  The lights were turned on and it looked more like dusk than the middle of the afternoon.  The Hawker was slow to adjust to the conditions and were second to the ball, with too much sloppy hand ball instead of playing wet weather footy.  SB showed us why they are a dangerous side on their own deck and if it was not for a couple undisciplined acts by SB individual players, the damage on the scoreboard would have been greater.  SB hit the lead kicking 5.2 to the Hawkers miserable 4 points to take a 10 point lead into the last quarter.  As the siren sounded for 3/4 time there was plenty of verbal between the two sides with SB echoing from their huddle “we’re coming for you”.  The challenge was put to the Hawker. 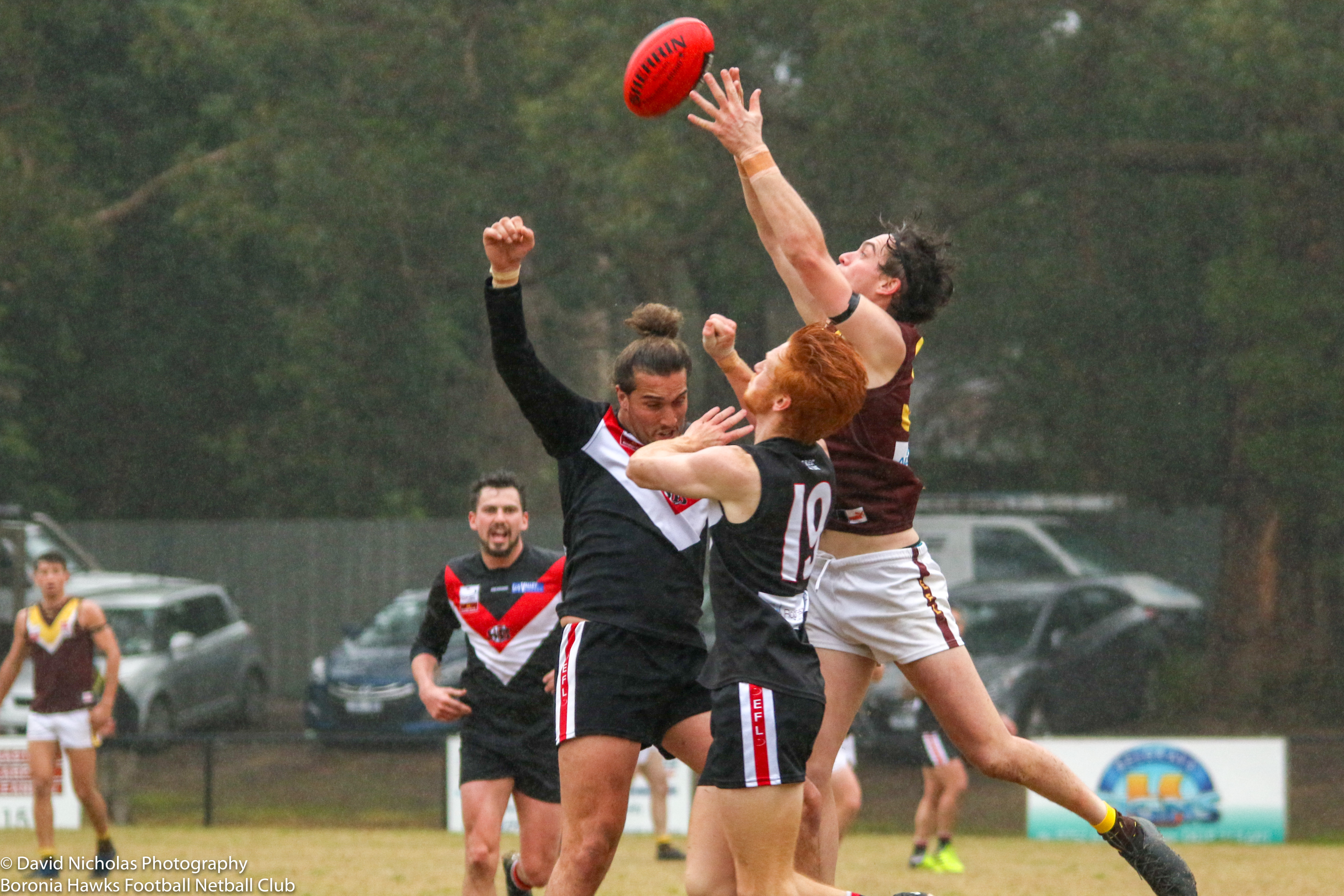 At the 3/4 time huddle there was no panic from the coaches: they made their moves and were in complete control.  For the players, they had been challenged both on the score board and shown how to play good, tough wet weather footy.  It was their turn to respond, put there head over the ball & win ugly.
The last quarter was played in wet slippery conditions.  It was a physical affair: hard tough contested footy; not many marks were taken by either side; with a huge amount of stoppages.  The backline held strong under extreme pressure and the midfield stepped up to even the contested ball at the stoppages.  Both sides were on the wrong end of free kicks & 15 meter penalties.  The Hawker kicked poorly and dropped a couple of tough marks inside 30 metres from goal, but ground out an ugly win kicking 1.6 to 1 point to take a 1 point victory over a side that played extremely well on the day. 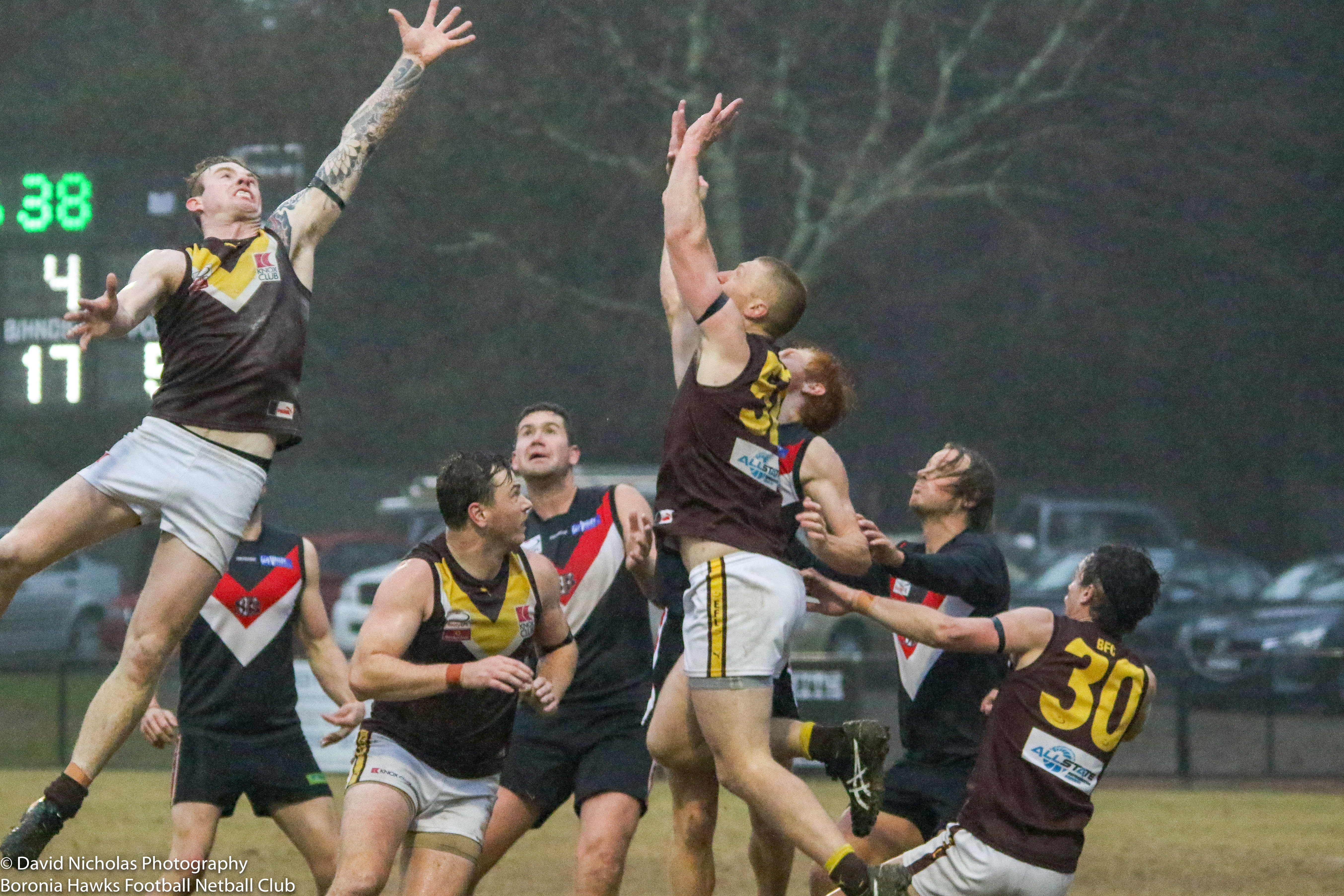