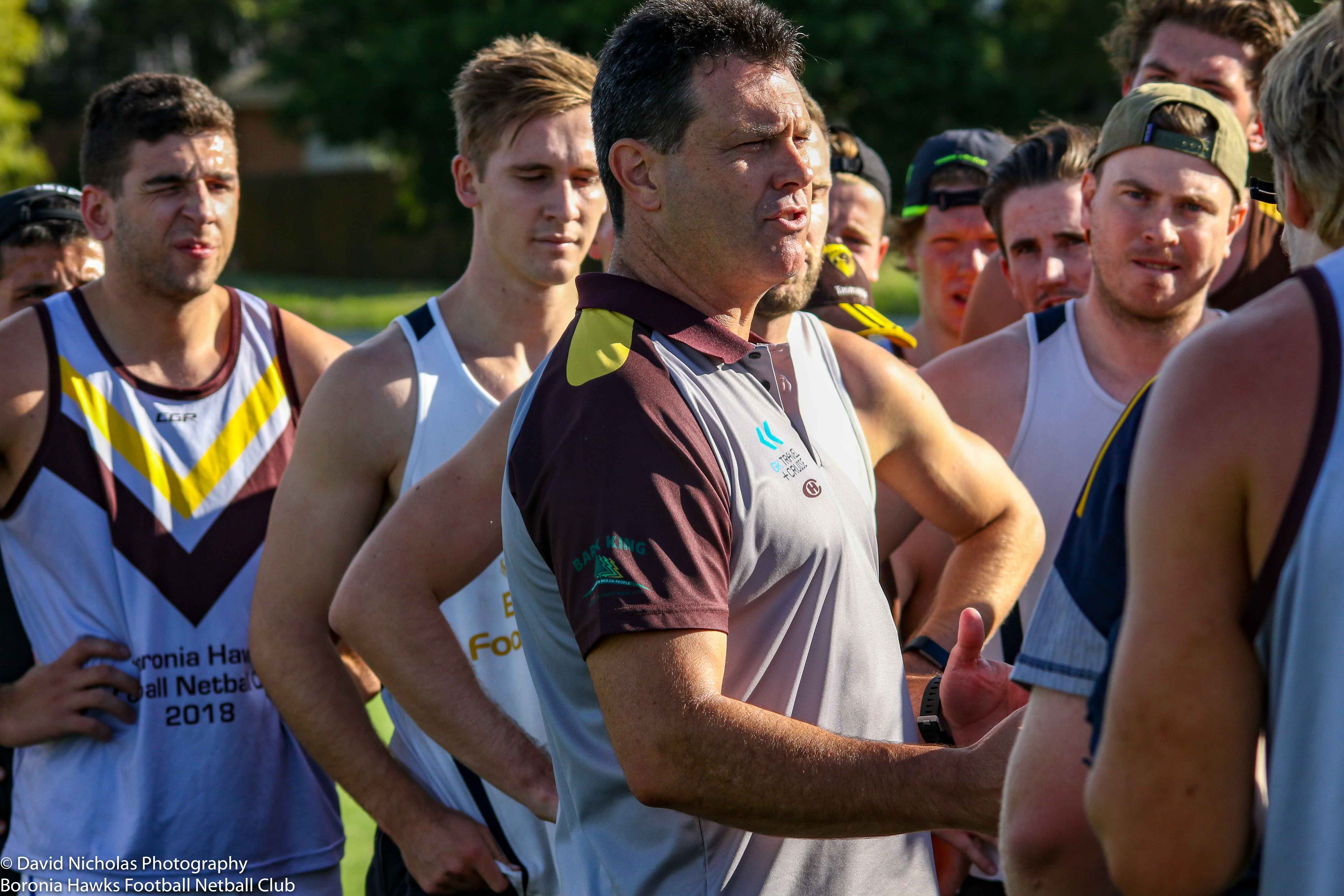 Q:   They go well on the supplements.

Q:  Who do you love more James Hird or Whitey?

MC:  I do love Hirdy & Whitey is a great young man.

Q: You are a long-time coach & player. How many years?

MC: 17 years senior football at both Bayswater & East Burwood, a long journey.  200 games plus, missed a few games for being undisciplined, a hard lesson learnt.

Q: Your best position on the ground?

MC:  I thought I was a midfielder for a time but started my career in the backline at Bayswater; played across the midfield / wings for a while at East Burwood; then finished in the backline for Bayswater again.

MC:  Playing with a good bunch of blokes.  The clubs I played for were a couple of clubs that had a lot of success.

Q:  You won a best on ground medal in a grand final?

MC:  I got best on ground in the reserves grand final, but just good to play with great mates.

Q: Best footballer you have played with & why?

MC:  Gary Galvin at Bayswater still at 33 he was a jet; Stuart Cook at East Burwood just kept kicking multiple goals even in his 30’s.

Q: Best footballer you played against?

MC: Langford who played at Knox was a fantastic footballer.  Played on the great Bernie Quinlan.

Q:  Best nick name you have heard at a footy club?

MC: Like most footy clubs you sometimes know blokes by their nick name more than their actual name.  Some nick names you just can’t print.  I remember having a few players that we only know by their nick names on the team board while coaching. Lucky I don’t do the votes.

Q: Teaks has given you a huge wrap but how would you describe Teaks in a sentence? 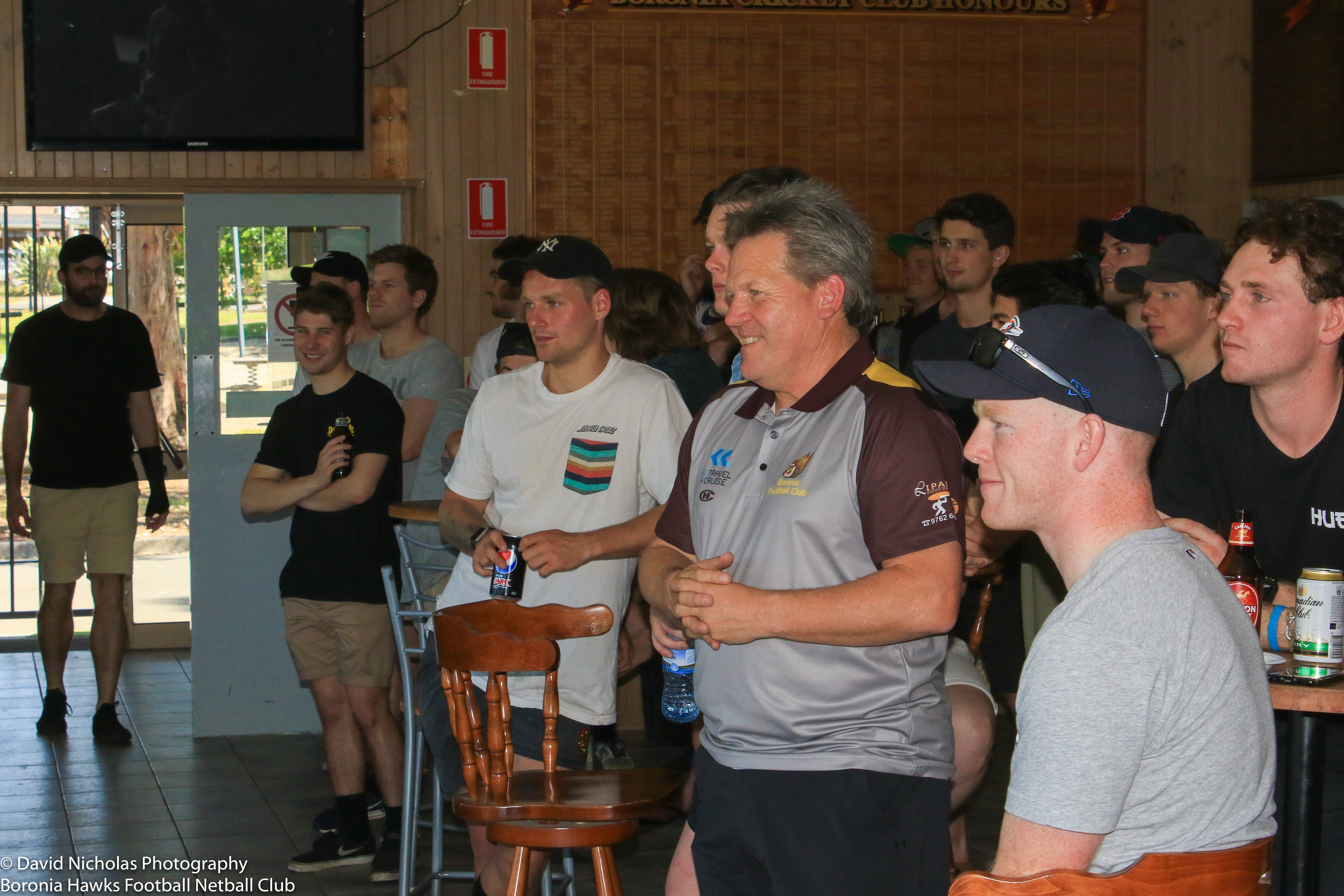 Q: You & Teaks have been a double act for a long time, who is the apprentice & who is the master?

MC:  We have a great friendship both when I played and now coaching together; but Teaks started as the master and is a great sounding board.  It’s been a great journey together –  I might have just about completed the apprenticeship!

Q:  You & Teaks must spend a lot of time together, do your wife’s ever think there’s something going on other than footy?

MC:  We do talk & spend a lot time together, but no nothing unusual, just a great friendship, If I was going to coach again this year then it was always going to be with Teaks.

Q:  I stand beside the coach’s box most games and you are all very controlled (except Ash), but what are the player non-negotiables in the Matt Clark coaching manual?

MC:  Discipline is what I believe in.  As a player I started my career very undisciplined and it cost me playing in a lot of big games with successful sides.  No umpire changes their decision and the stats say you can’t win every contest, so be disciplined and learn from each contest and each game.

Q:  Describe the characteristics that stand out for you in a footballer?

MC:  Quality person. Resilient.  A footballer who finds a way to get the job done.

Q:  The toughest footballer you have played with or against?

MC:  Gary Milligan & Mick Connel,l both at Bayswater.  Mick was just as tough off the ground as he was on the field.  Both great footballers as well.

Q:  What player at the footy club best represents Matt Clark as a footballer?

MC: A bit like H with a bit more pace.

MC: No no, I just meant more athletic. I’ll just shut up! 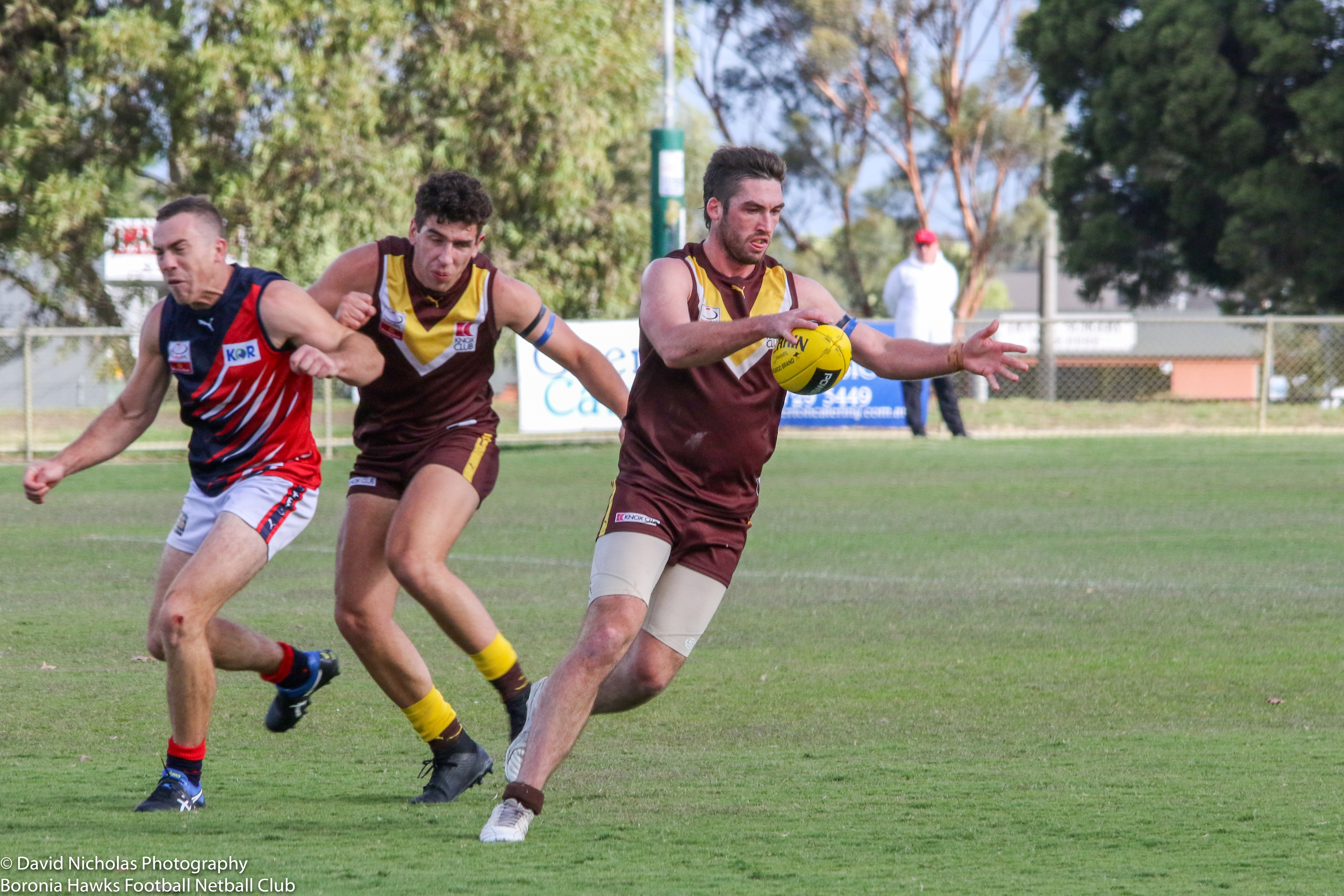 Q:  Have you a motto or saying that describes your coaching philosophy?

Q:  There is a rumour around the club you have Eddie McGuire syndrome?

Q:   Well Eddie has Buckley fever & you have Whitey Fever?

MC:  Yes, he is a good young footballer learning all the time.

Q:  Have you got an obsession with Cows? Why?

MC:  I do love a cow.  I do a lot of country work and am always looking at the cows.  I would like to own a few cows one day.

Q:  Just to clarify, what do you like about cows?

MC: I would like to have a bit of land, put a few cows on it, let them grow fat and turn them into steaks.

Q:  When have you cried other than a family event?

MC:  Gee you have good intel!  I might have shed a small tear when Hirdy retired, but I have never admitted it until now.

Q: How about when he got sacked for the peptide supplements?

MC: No, just a sad day for the club and it’s former champion player.

Q:  Watson had to give his Brownlow back.  Do you think all the Bomber supporters should return any proceeds they won from bets back during the peptide supplements scandal?

MC:  Watson’s Brownlow return was a political decision, I enjoyed all my Melbourne bitter slabs I won.

MC:  If that’s the case I’ll do a Buddy Franklin and sign for 10 years and maybe they can throw in a karaoke night every now & then! 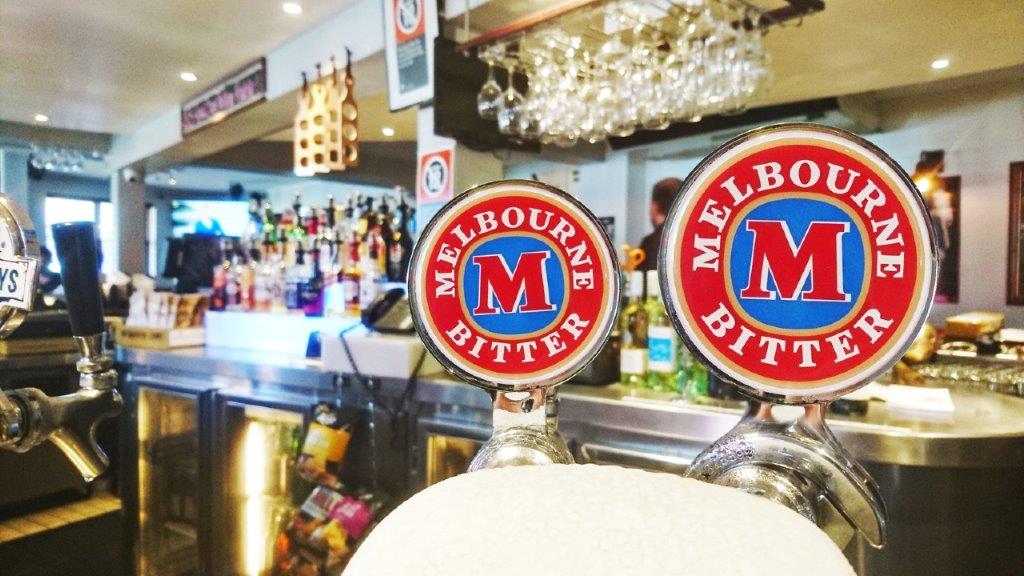 Q: You fancy yourself barking out a few songs.  What’s your go to tune?

MC:  After a few beers I don’t mind a bit of a sing.   Love Shack is a crowd pleaser; Stand by Me; a bit of Elvis goes down well.

Q:  How do you relax away from footy?

MC:  Family keeps me grounded & relaxed.  They are very supportive with my coaching.  I like to go for a run in the morning to relax and clear the head.

Q:  What have you learned about the Hawks after one pre-season & nine games?

MC:  A huge amount of opportunity for the players, supporters & club.  The ONE club structure is a great setup.  I’ve never seen this setup before at local level, it’s a great initiative.  The people around the club, their passion & hard work has stood out.

Q: I’ll give you a bit advice, you need to mention Woody (The Chairman) at every opportunity when talking on the radio or media or he’ll cut up rough.

MC:  That explains why he has not talked to me all week.  On the radio the other day they did ask me who is the power broker at the club.  I said Ash.

Q:  I think Woody is going to ask you for a game in the ones.  He’s getting a fair bit of me time on the Facebook page.

Q:  What did you learn more about after the Ringwood loss?   More about Ringwood or more about Boronia?

MC:  Obviously this is the first time I’ve seen Ringwood play.  They play a good hard brand of footy but for our boys I learned a lot.  There was plenty of knowledge gained about our team and players by the coaching staff to take into the second half of the season.

Thanks Matt “Clarky” and good luck for the rest of the season. 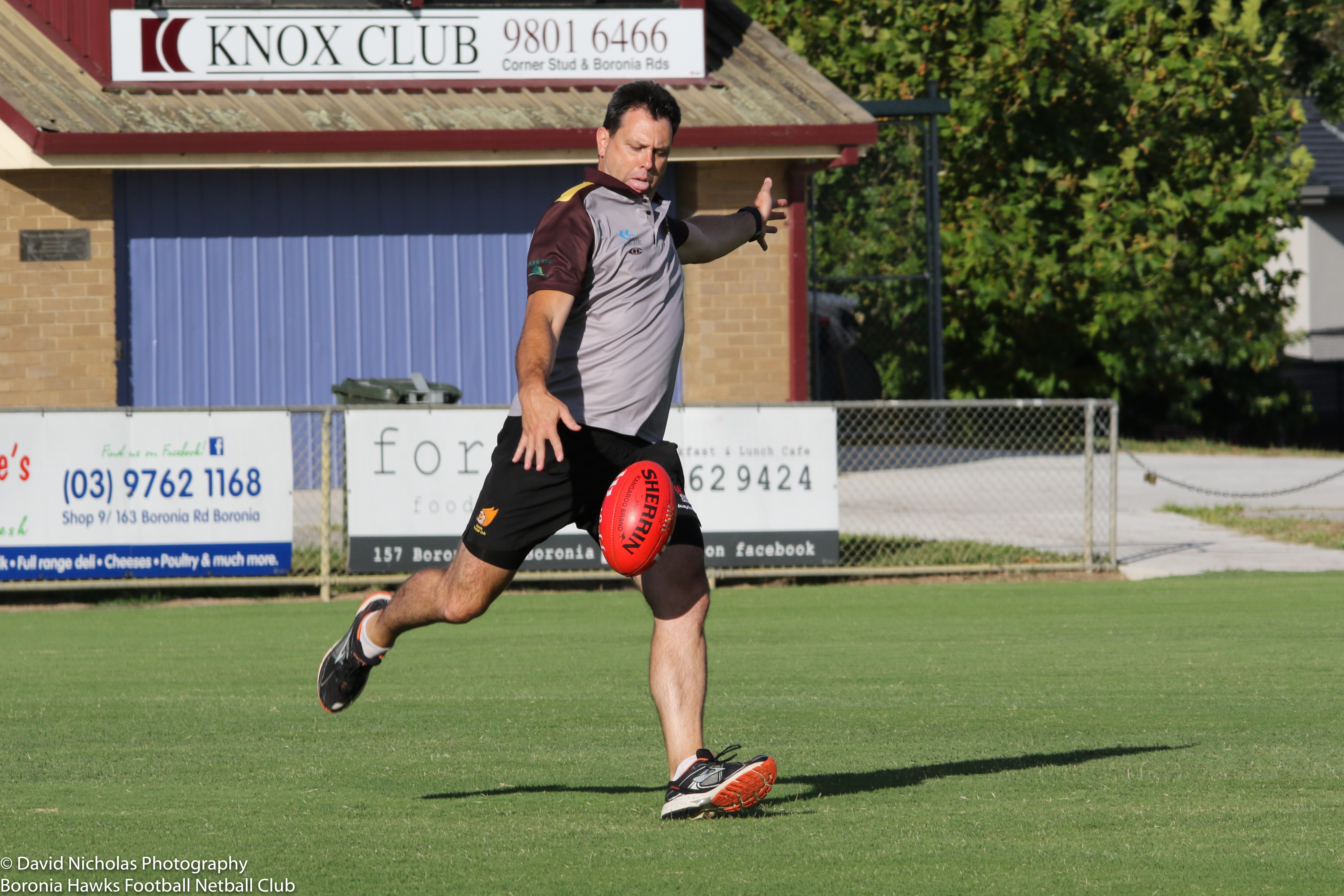