Best and Fairest and winner of the inaugural Krenn Medal: Kristan Wood

Always a great social evening to end the home and away season!
Votes will be counted LIVE for the Best & Fairest Awards for all our senior teams.
Votes for the last few rounds will not be revealed until the Senior Awards Night on 4 October at the Knox Club, when the winners are announced and the medals given!
$10 entry at the door – BBQ dinner – Jason & Billy’s Bar – music!

To say our season for the senior men has been a roller coaster would be an understatement.  Thankfully, nearly all our injured players are back on the field and, with three games to go, we should have close to a full list vying for a senior game come finals!

It would be great if as many supporters as possible get down to ‘The Hawka’ over the next two weeks to give our teams an extra boost leading into their finals campaigns.

Our senior women’s team kick off at 8:20am this Saturday for their final home and away match of the season, before they commence their first finals campaign at Mulgrave on 18 August.  Special thanks must go out to Lace and Snicko (Ray Lacey and Scott Nicholas) for doing a tremendous job coaching our growing list of female players. We began with 9 women last year, but they have built that up to well over 30 this year.  With two junior girls teams, who knows where we will be in season 2020!

After the senior game last Saturday, the Mulgrave rooms were just full of Boronia people. Probably 80% Boronia in their homerooms!! The senior umpire said to me; ‘The culture you have at Boronia is just amazing.  You have Panda, the Krenn’s at every game and people like Bomma running Coterie – it’s incredible!’  And he is right!

Our 19’s have been incredible with up to 5 eligible players playing senior football in recent weeks!  Our Development team is on top and our senior team is half a percentage point off top spot too! Without getting ahead of ourselves, the Club is well placed to have a fair dinkum crack come finals time!

Unfortunately, our two netball teams, Hawks and Brown will be hard pressed to play finals this season with only 2 games to go.  The Hawks in Premier Division have won 4 games from 11, with 4 thrillers decided by 4 points or less.  The “Brownies” have suffered from injuries all season and have only managed 2 wins so far.  On a brighter note, over 30 players have played netball with the Club this season, including a number of “cross overs” from our women’s footy team who are happy to double up for the weekend!

The Vets finished their season under lights in the wilds of South Belgrave last Friday.  The boys kicked on to celebrate the end of their season in fine style, because they played some great footy during the year and welcomed many new players to the Club.  Thanks to Joey, Jason and the boys for another great season.  Success will come!

Off the field, our new lights get installed at Tormore Reserve this week.  This is a most exciting development and will give our Club incredible flexibility when fixturing matches in future years.  Special thanks to Woody (Kristan Wood) for facilitating this project.  In addition, much work has been done behind the scenes to secure funding for a facility upgrade in the next 2 to 3 years.   We hope to have some meaningful announcements in the coming months!

Please get behind Murra (David Murrihy) and support our finals hosting program.  This is equivalent to a major club sponsorship and we need as many volunteers as possible to make this work!

We have the Presidents Lunch with Matthew Richardson, which is completely sold out, on August 17 and the vote count night after our last match of the season!  The senior Awards Night is on 4 October and DOES NOT clash with the Vet’s Footy Trip!

The next 7 weeks could be ‘crazy’ busy but get involved and cheer loudly!!

Boronia Hawks are very pleased to announce the results of the 2019 Major Raffle, drawn at the Boronia Hawks Ladies Lunch on Saturday 1 June by Jackson Taylor MP.

1st Prize: Two Return Tickets to Europe courtesy of Greg Krenn and GK Travel + Cruise was won by Kim Panting one of the players from our Under 16 Girls Team!

2nd Prize: a Weber Family Q BBQ courtesy of Brendan Lee at John Alan Betta Home Living at Knox was won by Bec Moore, not only the parent of Sam from our Under 13 Team, also a major sponsor through GJ Gardner Wantirna South.

6th Prize: a Fitbit Versa courtesy of Rebel Knox was won by Rebecca Anderson from Boronia Dentist one of our valued major sponsors.

8th Prize: a dozen mixed bottles of Wine donated by the Club was won by Jack R!

The Club wishes to thank all our generous sponsors and donors for support of our Major Raffle, which is essential for the successful operation and growth of the Club.

We also thank Greg Hannon, Wayne Preston and especially Samantha Dunkinson for the time and effort they put in to the successful conduct of the 2019 raffle.

Prize winners may contact Samantha Dunkinson or Greg Hannon if they have any queries regarding the collection of their prizes.

This weekend sees lots happening for our Club down at Tormore Reserve.  A little run down of the weekend courtesy of Leanne Rech, our fantastic Secretary of the HAWKS NEST COTERIE GROUP!

Friday 5pm-6:30pm sees 100 little Hawka champions in the making at Boronia Auskick whilst the two Netball teams will be in action a little later in the evening at various venues.  Good luck to Boronia Hawks and Boronia Brown!

Saturday sees the game day start with the Senior Women’s Team v Rowville at 8:40am followed by our Under 19’s (10:30am) v East Burwood, Development (12:35pm) and Seniors (2:40pm), both against Ringwood. As we have four teams playing, start times are a little altered for the day!

President’s Luncheon hosted by Greg Hannon – if you are attending please be there at 11:30am for an 11:45am prompt start!  Alan Tudge MP will be our special guest, along with young AFL stars Josh Begley and Dylan Clarke from Essendon Football Club!

Coterie BBQ and Drinks in the Coterie Marquee 1:30pm-4pm (huge thanks from Dean, Josh and Jayden at Malvern Continental Butchers for our burgers and snags). Coterie will also have a little raffle happening so pop a fiver in your pocket to be in it to win it!

Sunday sees 5 junior games at Tormore Reserve with the fantastic news that our Under 16 Girls Teams has merged with Knox Football Club with their first game together at 12:55pm.  Awards night for the Juniors at Tormore to round out a big weekend at the home of the Hawka.

Vets whilst not playing this weekend will be in big numbers around the Club supporting those that are playing as well as managing lots of the very big and some of the little jobs around the Club on game day – thank you gentleman.

A friendly, gentle reminder to head online to pay your Coterie Membership (or see us tomorrow at Tormore please). If you need to get your polo top, membership card or membership pack don’t hesitate to ask any of your Coterie Executive being Bomma, Dillio, Panda, Plugger or myself.

Looking forward to an awesome weekend at Tormore Reserve – the home of the Hawka.

What a great turn out for the Season Launch and it really saw some spirited bidding for the first six groups in the annual Player Auction!  Many thanks to everyone who participated.  The final nine groups will be auctioned on Saturday 6 April after the conclusion of the Senior Men’s game.

The are plenty of lucrative groups still to be put on the block, so we hope to see lots of supporters in the rooms from 4:30pm on Saturday 6 April for Part 2! 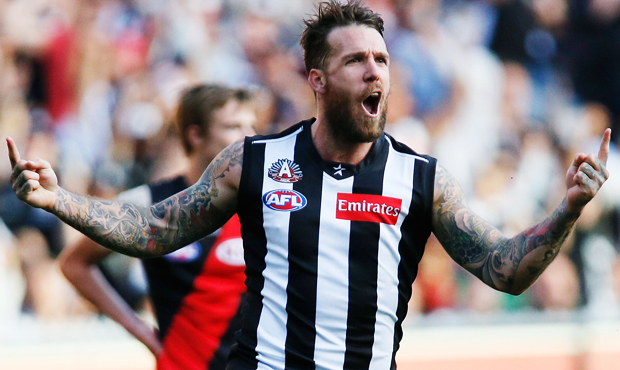 Tables of ten are available at a discount rate of $500 but must be booked and fully paid by MONDAY 6TH AUGUST.

When booking, please advise if you are using tickets as part of your sponsorship entitlements or Hawks Nest Coterie membership. * PLEASE BOOK AND PAY EARLY TO AVOID DISAPPOINTMENT AS TICKETS ARE STRICTLY LIMITED AND MUST BE BOOKED AND PAID BY NO LATER THAN THURSDAY 9th AUGUST. FIRST IN – BEST DRESSED.

Cash or EFTPOS payments at the door on the day are NOT available for this event due to the high demand for tickets. No exceptions.

One of the Boronia Hawks’ biggest functions is coming up, the 200 DRAW!

It’s a reverse raffle with 200 tickets sold.  The first number pulled out is not announced and is locked away, then they draw out the rest of the 199 numbers before they reveal who was the first one drawn (the winner).  The tension is incredible!

Tickets are $130 but that gets two people in, and it’s FREE beer, wine and $3 spirits through the night. Finger food is provided and there is LIVE MUSIC!  Please see Michael Goldsack at the Club on Thursday nights to grab your tickets! 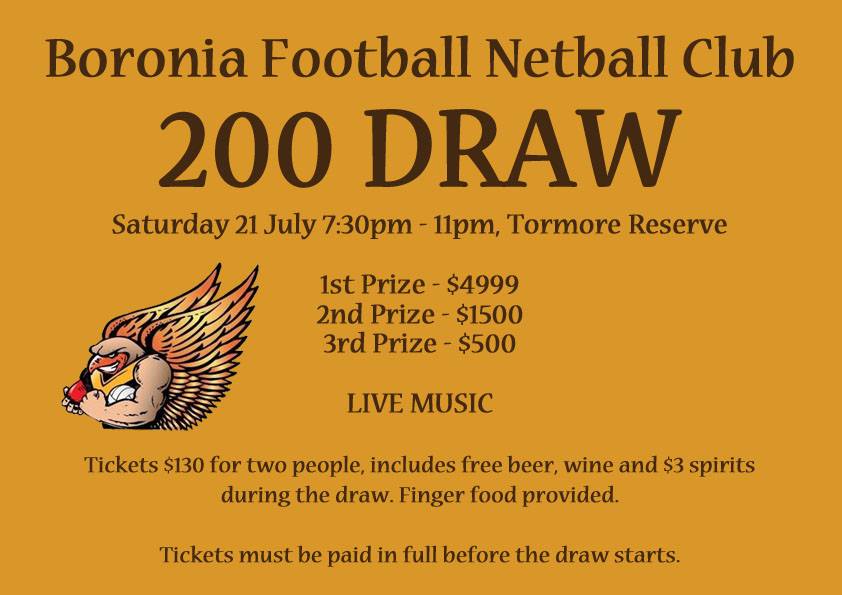